Leaving her full-time job as a 5th Grade Teacher to become an Entrepreneur full-time, with all the odds stacked against her and so many people telling her she shouldn’t do that, Aujah still insisted to follow HER dreams. She started an organization called Love’U Inc in 2017. Love’ U Inc, a women empowerment organization dedicated to Educating, Encouraging & Empowering young women to be the best version of themselves in underserved communities.

"Love'U Inc makes me see my work & efforts come to life more and more each day. "

Alongside building Love’U Inc organization Aujah Griffin also wrote a book called ‘Stole: The Ultimate Betrayal’ that has been released recently in August. Stole is a memoir that reveals Aujah’s truth as she speaks on the years of sexual abuse she endured as a child. Analyzing how it later affected every decision she made, from teen pregnancy, domestic violence, marriage & divorce all before the age of 25. Aujah never allowed her story to consume her. Instead, she figured out how to turn her story into lessons & blessings for people just like herself.

What inspired you to start Love’ U Inc?

Being a teen mother, is what inspired me to start an organization that would empower young girls by educating them on issues that as girls we usually don’t grasp until we have already made several mistakes. Issues such as Sex, drugs, men, love, and the value of education. I didn’t have these kinds of resources as a teen, so I knew first hand that is was needed.

What’s the biggest lesson you’ve learned, and would pass along to other women who have been sexually abused?

The biggest lesson I have learned after being sexually abused as a child was how to forgive. So many people will say they forgive, but don’t truly understand just what it means to forgive someone. I learned that I was forgiving them for me, it had nothing to do with them; but everything to do with my sanity. So if you have ever been sexually abused, accepting the betrayal and forgiving will set your soul free.

As an entrepreneur do you have innate qualities, or is it something that you learned?

My mother worked all her life and she would always emphasize the power in having your own business. After watching and assisting her to manage her own business for years inspired me to have my own. She has a passion for working with children, so she opened her own daycare centers. I have a passion for helping other women, so I have my own empowerment organization.

“Stole” is a memoir that reveals many of the obstacles that I have faced all before the age of 25. From teen pregnancy, marriage, divorce, depression, sexual abuse, domestic violence, and so much more. Stole is truly a gift to anyone that has gone through something in their life. After reading you will not only be inspired but will have found your own strength to push through anything that you have been through. 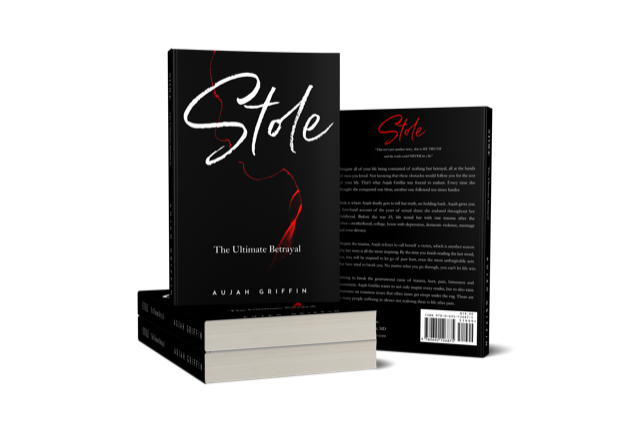 Stole, how did you come up with the name?

I came up with the name Stole, because that’s exactly how I was left feeling. I felt empty and robbed of my childhood, taken advantage of and stepped all over for much of my life. The title came to me in the middle of the night as I was sleeping and I literally woke up out of my sleep and quickly put the title in my notes. I struggled with finding the perfect title, but it stuck with me and I’m glad it did.

What was the hardest part to talk about in your book ‘’Stole’’?

The hardest part about Stole was addressing the years of sexual abuse I experienced in my childhood. I was molested by my father and raped by two of my older cousins as a little girl. So one could only imagine the emotions and mental torture I went through writing the very 1st chapter of my book.

What sacrifices have you had to make during life as an entrepreneur?

The biggest sacrifice I made, was leaving my Full-Time job. I had a great job as a 5th Grade Teacher but it was leaving me feeling miserable and stuck. I wasn’t happy and the stress began affecting my children. I had nowhere to turn to, so one day, I just had to put myself before the paycheck. Now I have been able to spend my time working on my dreams full-time, go back to school and homeschooling my own children.

What is your life motto?

Wow, there are so many life mottos that I live and will die by, but if I had to choose my number 1 it would have to be

”Even the most trying situations have an underlying purpose, so find the positive in the midst of the negatives. You may feel like you’re dying, but you’re not going to die.”

What have been some of your failures, and what have you learned from them?

My biggest failure in life would have to be thinking that I had to please the rest of the world. Many of the decisions I made were based on making other people happy. Living for others meant I cared what other people would say or how they felt about me and doing what others felt was best for me. I have learned that no one has to live MY life but me, so when it comes to MY happiness, I’m going to do exactly what Aujah wants to do.

If you had one piece of advice to our readers to those just starting out as a business owner, what would it be?

My biggest piece of advice would simply be to remain consistent and invest in YOU! If the passion is in it, those two things will happen naturally.