We Are Three Women in Tech Finance, Moonlighting As Game Creators

Hello! We are Kathryn (30), Amber (31), and MaryBeth (32), Co-Founders of Persist the Game. Our paths crossed in 2015 while navigating the male-heavy waters of Big Tech. It was girl crush at first sight. Collectively, we have nearly three decades of experience in corporate finance. We quickly bonded over our affinity for numbers and business, our love for exploring Seattle one new restaurant or park at a time, and our unashamed obsession with our dogs (we think breed-reveal parties are a thing).

The Further We Progressed In Our Careers, The More Alone We Felt As Women

During our careers, we found ourselves on teams with disproportionate male representation, especially in leadership. We had seats at the table, but finding confidence in our voice proved even more challenging based on the “feedback” we received. We were too pushy when we were assertive. We were too kind for showing empathy. We better earn our next promotion before we had kids — because if there’s one thing a baby hates, it’s a mom with ambition.

All of these hurdles began to feel suffocating the further up we climbed. And it didn’t stop in the workplace. This stress spilled into other areas of our lives. We started to wonder, “Is there anybody out there who’s successfully able to prep meals, workout, have a hobby, crush it at work, and track their ovulation cycle?” We felt like we were in a pressure cooker alone, simmering closer to an explosion as we fought these outdated expectations.

After a night with our friends, a lightbulb went off. We realized these nights together offered a much-needed cathartic release of the stress, frustration, and isolation we felt as women with ambition. Simply put, we needed a fun way to bond with a community of like-minded women in real life. We craved something that reminded us we weren’t alone in this journey.

We thought, “What if there was a game that called BS on outdated gender rules and celebrated life from the female perspective?”

To Create Something New, You Just Have To Start

We loved games, but had no idea how to create one. We spent countless hours on Google and scribbling in our notebooks before we booked a weekend strategy session at one of our favorite hotels for some creative inspiration. Once we had an idea that seemed promising, we booked our first game with some ladies in law school. They loved it, and we continued to test with different players, each time iterating to make the game better.

Next, we finalized the packaging and design (you won’t want to keep this one in the closet), identified a manufacturer (the lead time for first orders is substantial), and prepared to launch our Kickstarter campaign. After becoming Kickstarter funded and earning the “Project We Love” title, we launched on Amazon in November of 2017. These nine months from idea to retail launch felt like a whirlwind.

We often get asked, “how did you actually execute your idea?” Our best piece of advice is simple – just start somewhere! Our first ideas were scattered and mediocre, but this is all part of the creative process. Start moving and you’ll ultimately get there – but you have to take that first action.

We Created Persist To Inspire, Entertain, and Rally Women With Ambition And Male Allies

We set out to create a game that sparked laughter, shared learnings, and rallied women to come together and foster deeper connections.

Persist is a social card game that triggers different actions from single players or the entire group (think Cards Against Humanity meets Trivial Pursuit, Charades, and Table Topics). There are six distinct types of cards each requiring unique player actions (Trivia, Would You Rather, Sharing, Truth, Roadblock, and Act It Out). The cards cover topics across four life values: Career, Health, Relationships, and Leisure. To win the game, you have to be the first to collect three sets of “milestones” by earning certain cards.

In Persist, we aren’t afraid to call BS on outdated gender expectations, offering much needed comedic relief in areas inspired by real-life situations. From Pap smears to PHDs, Persist covers a wide range of topics sure to spark laughs and learnings from the whole group.

After playing the game hundreds of times, we never would have guessed how universal these truths are for women across all industries. The content in the game comes to life in a new way each time we play. Whether it’s used as an ice-breaker at a networking event or played with family members where surprising secrets emerge, each time players are able to laugh, learn, and connect in a way that is more engaging than simply visiting over a glass of wine.

Our biggest surprise when testing Persist is that men enjoyed it too! Humor has a great way of defusing the stigma around feminist topics. A game provides an opportunity where all player’s have a seat at the table. 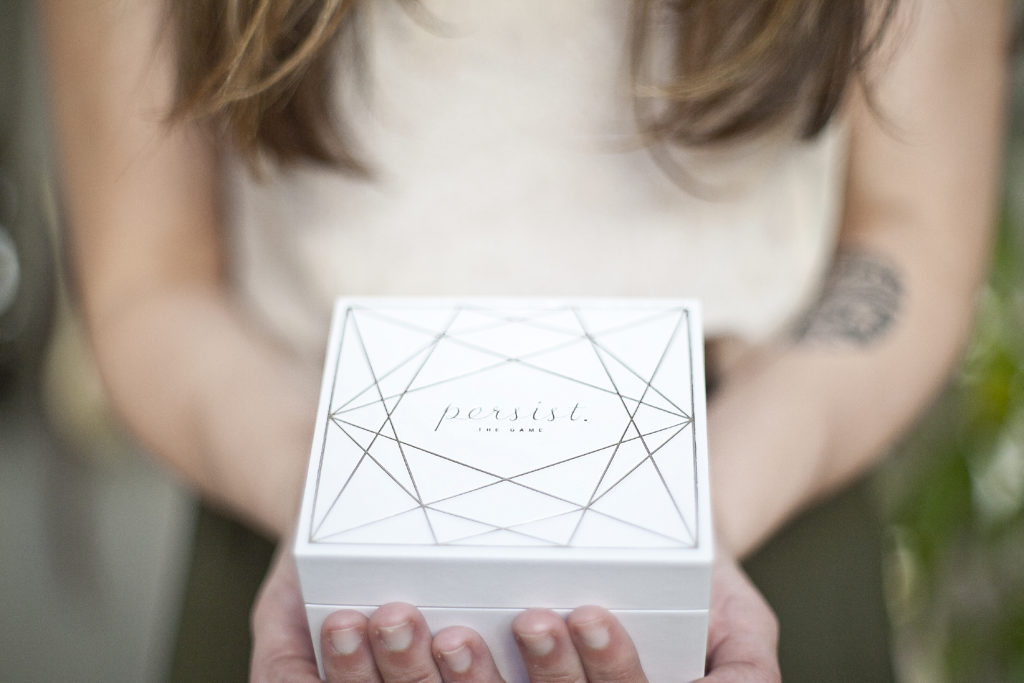 What Motivates Us To Persist?

Becoming entrepreneurs while keeping our corporate careers has not been easy, but we believe in entertainment as a medium for change. We want to bring women and men together in a fresh way. We want to change how society views women, one game at a time.

We are so grateful for all the women who came before us, winning us the right to vote and own property among many other freedoms. We want to do our part by making life more equitable for the generation behind us. On the toughest days, we like to think about how cool it will be decades from now to tell our grandkids that we were able to affect social change by creating a game that celebrates strong women.

One game at a time, we want to inspire women to learn, help them connect, and make them laugh in the face of adversity.

♥Want to get featured as Women On Topp? Send an email to contact@www.womenontopp.com under Feature Women On Topp.♥